Kishori Amonkar never got the Bharat Ratna, but she was India’s jewel 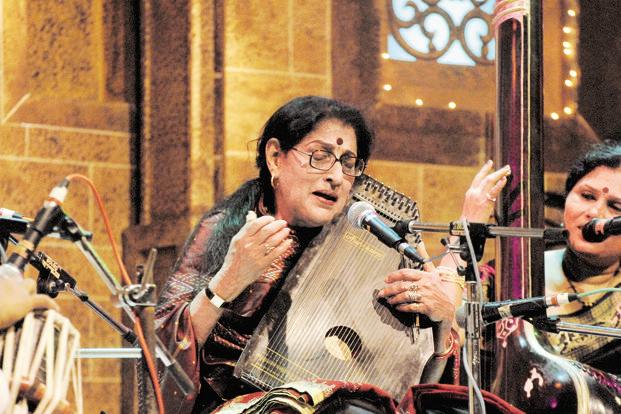 The human voice has a range—at its base, it is deep. The voice emerges from somewhere within, grounded firmly as if it were subterranean. Then it rises slowly and reaches the peak, at which point it becomes so sharp and clear that even when it has stopped, the sound reverberates in the silence. Kishori Amonkar’s genius lay in knowing the boundaries. She would then guide her voice along the contours of sound without knocking into the boundaries, making it seem astonishingly easy. The rest was silence.

She was a perfectionist. She did not like latecomers or disturbances of any kind at her concerts. She expected her accompanists to be accomplished—I remember one concert where midway through an aalaap, with which she initiated her performance, she turned around and instructed the accompanist what she must do, to provide the base from which her voice could soar. She often closed her eyes when she sang, her mind concentrating not so much on the words, because for her the lyrics were often immaterial, but on the architecture of the raga, so that she could meander through that open space within the bandish (composition) without getting lost, without hitting any wall, as her voice looked for and discovered the window through which she could leave those confines and float even higher, without breaking any rules.

Her annoyance with disturbance was real, and some mistook her temper (she was often called the diva) as a manifestation of her ego. On stage, however, it wasn’t her ego that was being disturbed; it was her willingness to submit, her devotion, that was being distracted, and she resented that. She was immersed in her raga: Like Arjuna, she was aiming at the target while looking at its reflection. She was focused on her bandish. At that moment, little else mattered—she could see her voice helping her travel towards perfection which was visible only to her, which lay within her grasp, and when she reached it, there was joy, satisfaction and gratitude, and her audience realized the power of her imagination.

She once told the journalist Sunil Sethi in an interview: “I must sing. I don’t sing for the gallery, I sing for him (referring to the divine).” When she sang, she became one with the swara (note) and the sur (key)—words didn’t matter, and peripheral noise was sacrilegious. She could see the note in front of her eyes, she said. She plunged into the language of the notes, to decipher the sounds, which may seem without meaning in any language, but yet were understood in every language. She could tell apart the effects of different notes in different ragas; she could inhabit the micro-notes, leading up to the playful jugalbandi, the virtuoso dialogue with the tabla player, or with a maestro like Hariprasad Chaurasia on the flute. The raga, the structured melody of classical music, became a live entity: formless yet real, fragile yet imperishable, fleeting yet memorable. She once said, “I surrender before the raga; I request him to show me the colours of notes.” She begged the raga to reveal itself, to go beyond its grammar, to realize the ecstasy that seemed so attainable and yet so distant.

I was lucky enough to have heard her live many times. Modern technology made her voice my companion on countless journeys, in all the cities in which I lived. Her joyous aalaap would provide bliss and even her plaintive notes could alleviate gloom. Her voice calmed the heat on blisteringly hot Mumbai summer afternoons; her raga Miyan Ki Malhar reminded me of a walk in the monsoon on Marine Drive even on a dark winter evening in New England; another raga, Yaman, offered warm comfort on the night snow fell lightly in New York; her rendering of the raga Bhoop erased the boundaries between my home in London and Mumbai, bringing back the vivid memory of her singing at the open quadrangle of St Xavier’s College.

I heard her a couple of times when she had a sore throat and you could feel her pain—her mind could visualize the landscape her voice wanted to inhabit, the frown on her face revealing pain because she knew she could not do what she wanted. But she would concentrate and try, and then her face would relax once inspiration had struck, a door was opened, and she had found another, softer, more melodious way out of the constraint, as she moved with the raga to a different scale, letting her voice climb a different peak. Then her eyes would open and if you sat close enough, you might even see her eyes glistening, and you could see the faint glimmer of a smile emerging on her face—in the battle between what her mind wanted and what her body offered, she had found a third way, bringing the two in harmony. It was as close as you could get to a divine experience.

The magic of Indian classical music is that no two concerts by the same artist are alike. Even if the accompanist is the same, the raga is the same, as is the singer, each performance becomes unique. You could have heard her raga Hamsadhwani at the Sawai Gandharva Bhimsen Mahotsav in Pune, or at a concert at the Bhulabhai Desai Auditorium in Mumbai, but the two would sound different. We marvel at the variety today even within the same thumri, a form of light classical music: Thanks to the recordings on the Internet, three of her versions of the unforgettable Babul Mora are relatively easy to find.

She never got the Bharat Ratna, but she was India’s jewel. When she sang Sahela Re, she became our friend, as we met her, and through her, we met music, her friend.

Salil Tripathi is a writer based in London.