National Theatre staged a play ‘The Father and the Assassin’ during the month of May and June 2022 in the Olivier theatre.

The play is written by Anupama Chandrasekhar; an Indian playwright and screenwriter based in Chennai. Her work has been produced in India, Europe and North America. She became the first International Playwright-in-Residence at the National Theatre Studio. Anupama Chandrasekhar, the director Indhu Rubasingham and set designer Rajha Shakiry have created a play that will leave a deep impression on many minds.

The title raised question in some people’s mind. Father? Whose father? Who was the assassin? What was the motivation behind that assassination? Few who had some information felt that life and work of Gandhi is known globally and his assassination was even more discussed in every corner of the world, but we hardly know about the assassin and his motives except that he was a radical Hindu. So, quite a number of viewers were eager to discover the other side of the coin.

The play begins with Godse, the assassin’s monologue. He explained why he committed such a crime. He also challenged the audience by saying, “At the end of this play, you will erect my statues and even worship me.” Perhaps that line indicates the present situation in India and to certain extent other parts of the world too.

This is a story of Godse from his birth to the day of his execution. Gandhi’s entry into Indian politics, his struggles for independence and earning fame as The Father of the Nation intersects the tumultuous life of Godse. Balance was kept between the truth, history and fiction regarding the British rule, India’s independence movement and the assassin’s life story, yet through the dialogues between the national leaders Nehru, Sardar Patel, Jinnah and Godse himself the history is narrated.

As a child and a young boy Godse was attracted by Gandhi’s movement and he joined the non-cooperation movement in 1920, but he became a devout follower of Vinayak Savarkar after passing many hurdles in proving his loyalty to Savarkar’s organisation and his capability to execute planned actions. The purpose of the play is to take the audience on a journey of Godse’s life from a boy raised as a girl due to his parents’ superstitions, lacking self worth as a teenager and angry young man who failed to belong to any occupational or political group. At that point he finds his place in the plot to remove Gandhi from the screen of India in order to establish a Hindu nation.

It is well known that Gandhi did not have time to communicate with his assassin, but near the end of the play there is a prolong dialogue between the assassin and the one who was assassinated. Perhaps the playwright wanted the audience to imagine what if that dialogue did take place. The audience is drawn into expression of raw emotions from both main characters; Gandhi pleading Godse to engage in conversation, try to understand what he stands for and control his hatred; while Godse raging in anger explaining how Gandhi is making him feel very belittled by showing his virtues in such a nonviolent manner. At the end, Godse tried to convince the audience that he has done a favour to the world by killing Gandhi as he diluted the Hindu religion by reading Bible, Quran and Bhagvad Geeta and by favouring Muslims in India. His argument of giving Gandhi a death fit for a Mahatma otherwise he would have died as a crippled old man might have convinced some viewers. 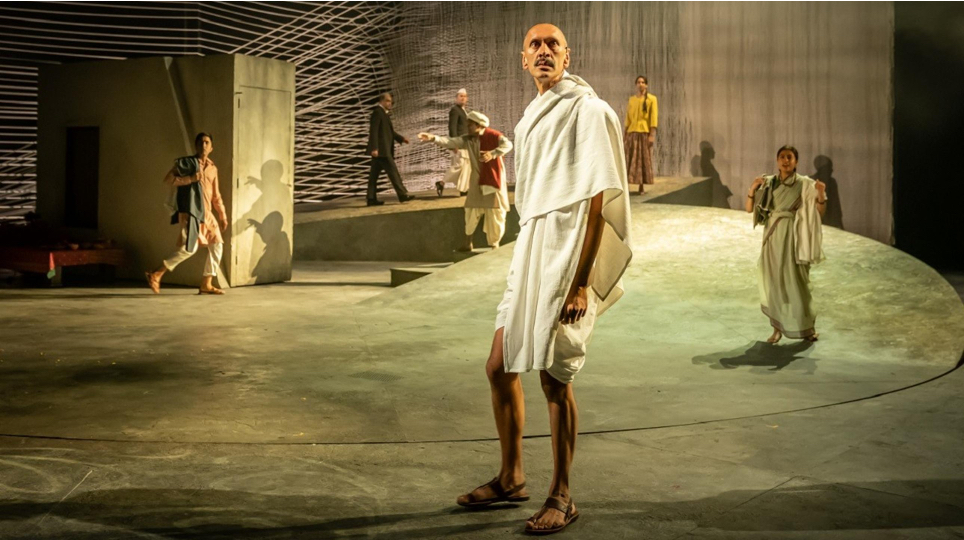 The costumes and stage props were provided by the UK based organisation ‘Where Does It Come From’, and ‘Khadi London’ in collaboration with various Khadi producing institutions in India. The impact of simple and appropriate costumes, specially created woven landscape together with the actor playing Gandhi spinning the big wheel was very effective. Considerable time and effort was spent on the light, make up and sound effect. Each and every characters’s acting was phenomenal. Three outstanding roles were that of Vimla, Godse and Gandhi. Godse’s outbursts while talking to his parents and Gandhi and to see old Gandhi’s shadow bent on his stick all alone would bring tears to anyone who has  humanity left in their heart.

The playwright Anupama Chandrasekhar seems to have left the decision to the audience whether to justify Godse’s act of assassination of one of the worlds’ most iconic persons because of his troubled childhood and series of events leading to his radicalisation or to conclude that no matter what happened in his personal life, his perception of Gandhi’s ideologies and actions were mis-conceived and therefore his act of killing Mahatma cannot be justified.

After the applauds died down, a thin line of hope lingered in the air; a wish that people all over the world would understand what destructive effect can radicalisation have on not only on an individual, but on a group of people, on a nation and in fact on the whole world.

The last words of Gandhi ‘Hey Rama’ did not ring in the theatre, perhaps drowned in the three thunderous booms of the bullets.

For more information on organisations working towards creating equal and just society here are some links to follow.

Metta Centre for Nonviolence based in the USA

Three organisations based in the UK